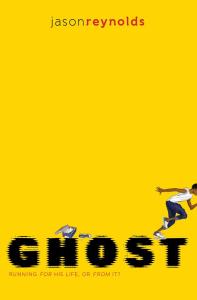 Jason Reynold’s middle-grade novel Ghost speeds through Castle “Ghost” Cranshaw’s story, telling it with the perfect pace and a well-written colloquial narration. The novel is the first in Reynold’s series of Track novels, each of which explores a different member of the Defenders track team.

Ghost has been running since his dad tried shooting him and his mother three years ago, so he feels confident racing against members of a local track team. After his performance, Coach recruits him, kickstarting a series of events that could change Ghost’s life. Through Ghost, Reynolds tells stories of diversity, economic disparity, bullying, gun violence, and trauma.

The book is compelling, enhanced by the frank narrative that provides deep insight into Ghost as a character. He’s torn. Since his dad pulled out his gun, Ghost has always been ready to run away. He doesn’t sleep in his bedroom; he sleeps near the door just in case he and his mom need to run again. Despite being well meaning and trying to make things easier on his mom, he often finds himself getting into trouble. Ghost has “a lot of scream inside.”

When he joins the track team, he finds an outlet, and this is where the real character development begins. Experiencing the story from his perspective is a whirlwind; Ghost’s colloquial narrative is so utterly honest and believable, and his genuine voice heightens the impact of every moment. Between his narrative and his actions, Ghost is an incredibly three-dimensional character. While he is no doubt the most captivating character in the novel, Reynolds also ensures that the other characters are well-rounded on their own (of course, he leaves details out for the other track team members that we’ll get to learn more about in future books).

When the novel ended, I almost felt as if my copy was missing pages. While the book tells a complete narrative and Ghost has a complete arc, it feels as if there is so much story left to tell when it comes to the main character. Part of me wishes that the future Track novels would remain in Ghost’s perspective, but I also expect Reynolds to continue exploring his character—though much more subtly—as the series progresses. Nonetheless, the fact that I so wanted to read more of Ghost’s story just proves how compelling he is.

I won’t hesitate to read the rest of the series as the books are released. Treating the series this way—jumping into the perspectives of the other team’s new members—will provide interesting insight and new angles. I’m excited to get to know more about each of these diverse characters.

Learn more about the novel on Goodreads, or check out the author’s website.